“I still hate you,” I tell him, pushing a dark curl of hair off his forehead.
He nods. “I know you do.”

Olive is always unlucky: in her career, in love, in…well, everything. Her identical twin sister Ami, on the other hand, is probably the luckiest person in the world. Her meet-cute with her fiancé is something out of a romantic comedy (gag) and she’s managed to finance her entire wedding by winning a series of Internet contests (double gag). Worst of all, she’s forcing Olive to spend the day with her sworn enemy, Ethan, who just happens to be the best man.

Olive braces herself to get through 24 hours of wedding hell before she can return to her comfortable, unlucky life. But when the entire wedding party gets food poisoning from eating bad shellfish, the only people who aren’t affected are Olive and Ethan. And now there’s an all-expenses-paid honeymoon in Hawaii up for grabs.

Putting their mutual hatred aside for the sake of a free vacation, Olive and Ethan head for paradise, determined to avoid each other at all costs. But when Olive runs into her future boss, the little white lie she tells him is suddenly at risk to become a whole lot bigger. She and Ethan now have to pretend to be loving newlyweds, and her luck seems worse than ever. But the weird thing is that she doesn’t mind playing pretend. In fact, she feels kind of… lucky.

“I think it would have been delusional for me to think I could ever get this lucky.”

This book is utter perfection. I’ve been vocal about my love for hate-to-love books but The Unhoneymooners takes my (already high) standards and exceeds my expectations.

While reading the book, the movie Just Go With It with Adam Sandler and Jennifer Aniston kept ringing in the back of my head. Similar in plot, Olive and Ethan take their siblings’ (free) honeymoon after their wedding was ruined by bad seafood. However, in order to avail of the honeymoon, they must pretend to be their (married) siblings, Ami and Ethan. Their fake relationship escalates when Olive’s boss and Ethan’s ex end up in the same resort as them, so Olive and Ethan really have to sell their fake marriage. This includes spending time together, holding hands, and even the occasional stage kiss.

The development of the plot takes place in Maui, but a good chunk of the book is set in the post-fake-honeymoon setting of the city–a stark and realistic contrast to the whimsical romance in literal paradise.

The book satisfies not only hate-to-love readers, but also those who read contemporary romances. The quotes are hilarious, sweet, and heart-wrenching altogether. I was bursting out in laughter because of the comedic tinge of book, a difficult feat that’s hard to achieve since I’m a poker-faced reader.

Together Ethan and I are above-average intelligent people, so why are we stupid together?

Another aspect of the book that I love is how the female main character is bi-racial and actually includes the culture in the story. Olive and her identical twin sister Ami are half American and Mexican, and the close-knit and large family make a significant impact that show us just how family-centric Mexican culture. As a Filipino whose culture regarding family is similar to that of Mexican culture, I appreciated this a lot.

All in all I was really satisfied with this book. I did not expect the conflict to come from that angle and I was pleasantly surprised because I didn’t see it coming. When you’re a seasoned reader, it is almost inevitable that I’ll guess the conflict and the resolution but this one really kept me guessing until the very end.

If the cover alone isn’t enough to pique your interest, consider this my personal recommendation. I’m putting this on the same pedestal as The Hating Game by Sally Thorne. 5 stars!

It hits me that just because I think I know what’s going on, doesn’t mean I really do.

Rumor has it your dad brought her flowers and she pulled off every petal and used them to spell PUTA in the snow. 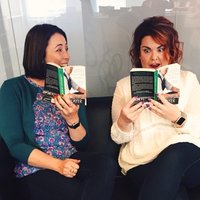 Christina Lauren is the combined pen name of long-time writing partners/besties/soulmates/brain-twins Christina Hobbs and Lauren Billings. The coauthor duo writes both Young Adult and Adult Fiction, and together has produced fourteen New York Times bestselling novels. Their books have been translated into 30+ languages. (Some of these books have kissing. Some of these books have A LOT of kissing.)